For one brief moment in added time, the fear of God went into MK Dons fans.

Amid the tension, it looked as though Mansfield had gradually begun to run out of ideas and MK Dons were beginning to see that they could hold out. But then an awkward defensive clearance went to Neal Bishop and suddenly Dons fans could see the worst potentially about to happen.

Mercifully, Bishop’s strike hit an offside teammate and bounced away, allowing respite for an MK Dons backline that, while not as under siege as it could have been, was still definitely the more taxed in the second half.

A sense of relief in that moment was plain for all to see, just as it would’ve also been a few moments later when the referee blew his whistle to declare the regular season over and MK Dons a League One side for next season.

Indeed, had Mansfield got something on the last game of the regular season, then MK Dons would now be in the play-offs and preparing for a trip to Newport this evening. (09/05)

Instead, what has not been a straight-forward campaign, be it through defensive injuries, patchy runs, late equalisers, and a few suspect results at the end of the year has a happy ending for the Dons’ fans, and thus can start planning for next season rather than for a high stakes post-season knockout match.

Ultimately, Saturday’s match saw MK Dons hold more in reserve than an opposition who slumped over the line. As a result, Paul Tisdale’s side swiped the automatic place, and with it, a suitable reason for celebrations both after the game and at the end of season awards the day after.

Things could’ve been a bit flat at the ceremony had it been otherwise, but there was good reason for the Dons players to celebrate and have party antics worthy of documenting on social media. They’d set out what they needed to do courtesy of one final twist.

Mansfield Town arrived in Buckinghamshire with the advantage courtesy of a stronger goal difference, but the moment David Wheeler struck to give the hosts the early advantage changed the dynamic. 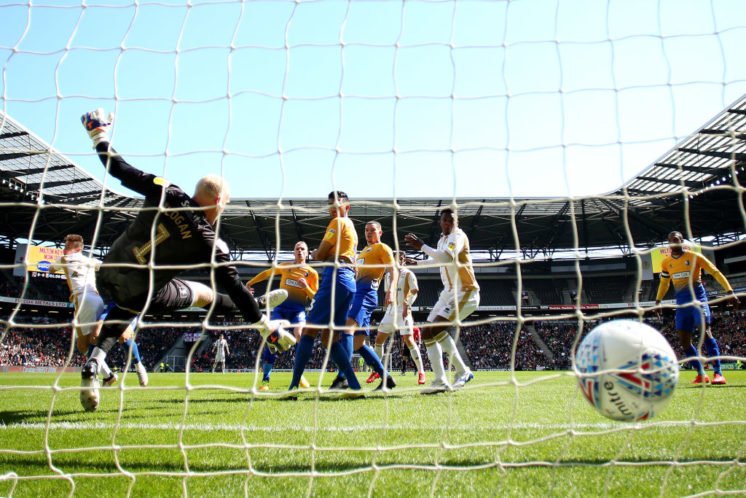 Many of the 20,000 or so in the stadium were certainly expecting the game to have been a more high-scoring affair. But in the first half, it was the home side who looked more on it. A few cleverly-timed blocks from Mansfield defenders prevented it being 2-0, which certainly would’ve helped the Dons fans relax a little more.

Of course, as we’ve all seen in the Champions League in the week since that League 2 final day, even seemingly nailed-on advantages can be overcome, and one goal is a fragile lead.

But in saying that, had it been an ordinary game at any other point of the season, or indeed one or both of the two sides had nothing to play for, a more neutral observer may have felt the Dons were quite comfortable.

Mansfield offered surprisingly little given they possessed a number of good goalscoring talents, such as Tyler Walker, and while they did have their moments, they didn’t force Lee Nicholls into as much action as other teams have done this season.

In front of Nicholls, the Dons repositioned back to a system with three centre backs, as had been their standard formation for the first part of the season. It had the air or being a high stakes way to reintroduce George Williams and Joe Walsh, both of whom have recently been missing through injury lay-offs.

But the pair of them lasted all the way to the end, and along with January signing Russell Martin, the trio formed the barrier required to keep Mansfield quiet.

It all added up to an arrangement worthy of getting the result needed to invoke a combined sense of relief and elation that has gone around the place since.

One only need look back at the home defeat to Scunthorpe at the end of last season that put the Dons out of their misery and out of League One, after several weeks where it was looking like the drop was about to happen.

It doesn’t need recounting that 2017-18 was a thoroughly miserable time for MK Dons supporters, and comments from those who were there indicate the vibe in the dressing room was little better.

There was an importance on making sure the stay in League 2 was brief, and it certainly will have been to relief that after all the twists and turns the 4th tier could throw at the Dons, the objective was delivered.

Some cynics from the outside might well say the Dons could’ve massed a greater challenge to Lincoln, given their status as pre-season favourites, but with a situation always in flux, simply getting promotion over the line was the core goal, and doing so was ultimately just cause enough for the delight shown after the Mansfield result. 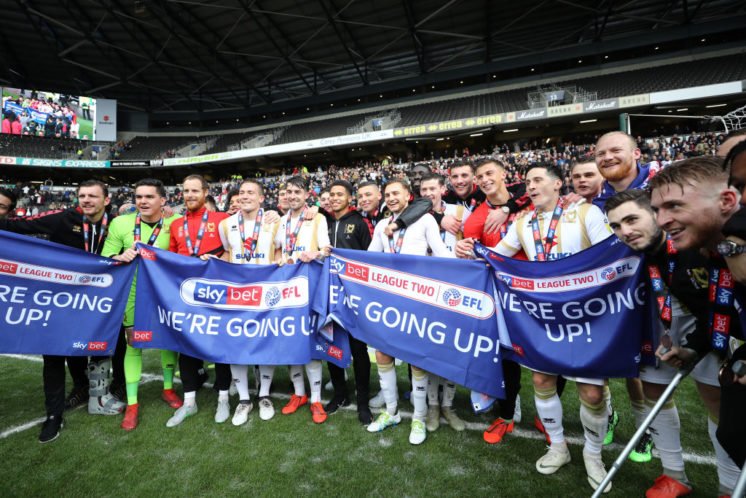 But as is always the case, with that achieved, the next stage of course is wondering “what’s next”. Just because the dust has barely settled on 2018-19 – and indeed, other competitions including the play-offs are still ongoing – doesn’t mean its time to consider what happens next.

League One can at best be unpredictable. One after all saw that their relegation battle was decided by goal difference and at one point conceivably featured 13 teams fighting to survive. The more positive and optimistic, by contrast, will have also spotted the success enjoyed by Luton and aspire to do something closer to that.

Whichever way next year goes, Saturday’s performance was all about a greater test of nerve, and by hook or by crook, MK Dons won out. The goal now is ensuring the morale boost leads to positive momentum next year and in turn generate a run towards greater things.