Perhaps the most you can say for a largely uninteresting Abu Dhabi Grand Prix is that the 2020 Formula One season made it to that final race.

Few sports looked to have more issues adapting to the covid-era than F1. Everything looked rocky after the Australian Grand Prix debacle, as F1 made it to Melbourne despite the pandemic building, then had to leave before even doing a practice session after McLaren and Pirelli confirmed positive test results and a farcical to-and-fro ended with the event’s cancellation, if only after many fans had turned up to it.

Races were cancelled as the world shut itself inside, and there were doubts such a person-intense international sport could happen in 2020.

Long time F1 supremo Bernie Ecclestone even suggested binning the year, but Bernie’s successors Liberty Media, plus the FIA and the teams, created an ad hoc plan that pulled everything together.

It was for sure a different F1, as the season reverted to just European and Middle Eastern tracks, with street races and events elsewhere in the world dropped.

The necessity saw creative approaches taken to create a 17 race season with no mid-season break. Austria, Silverstone and Bahrain did multiple races, while a further 5 tracks not originally planned to be used were added – debutants in Mugello and Portimao, and returns for Nurburgring, Imola and Istanbul Park.

With so much potential for going wrong, the fact F1 was even able to complete an exciting retirement-heavy season opener in Austria felt good enough, while reaching the minimum 8 races required by the FIA to count as a championship was a positive milestone. The fact they did the entire 17 race calendar in the middle of a pandemic is impressive organisation.

It might well be the case something felt weird with empty grandstands at most events and masks everywhere, plus the season had the weird top headline where the sporting context saw the championship race fairly simple. Lewis Hamilton’s victory at the first Silverstone race on 3 wheels felt like a pivotal moment – not least as his only real rival in team-mate Valtteri Bottas finished outside the points – and car 44 just ran up the score from there.

But we still had an impressive accomplishment to get any championship done, and there was plenty of frantic action to keep the spectacle a justifiable centre of attention this year.

There were still plenty of glorious individual moments, be it shock wins for Pierre Gasly and Sergio Perez, the highest amount of podium finishers in a single season for 8 years, impressive cameos by George Russell and Nico Hulkenberg, and the unpredictability of watching teams grapple with unfamiliar circuits. Even though Hamilton was dominant, it was still impressive to see history in motion as he took his 7th title and broke Michael Schumacher’s win records.

All the teams played their part in an entertaining season, even if 3 of them were largely cut off from the rest.

Alfa Romeo, Haas and Williams spent most of the year competing in a league of their own at the back, with the first two hindered by Ferrari’s engine being slower but still nicking the odd point, and Williams still rebounding after a shockingly bad 2019. They failed to score points, a team now under new management has a platform to improve.

As far as the 2020 grid goes, Mercedes’ domination was largely aided by Ferrari’s collapse. At several rounds in 2018 and 2019, Ferrari had the fastest car, and with race winners on track and a bloated budget at their disposal, they gave the Mercs a run for their money when at their best.

We still don’t know what Ferrari and the FIA agreed about engine trickery, but it was something big after Ferrari’s performance fell off the cliff in 2020. The Scuderia disappeared into the midfield, with routine Q2 exits, a humiliating Monza where neither car finished, and a real sense of implosion. It was pronounced on one side as while Charles Leclerc impressed in dragging a donkey of a car to high finishes, Sebastian Vettel never looked comfortable in his final Ferrari car.

With Red Bull having their lead car endure 5 DNFs and the other not on the same level, it opened the door for a straight title fight between Mercedes duo Hamilton and Bottas, but that ended up as a washout.

Bottas won the season opener but by the time he won his second race of the year in Russia – thanks to a bizarre Hamilton penalty – he was pretty much done, and that was before a DNF at Nurburgring, a thumping Hamilton win in Portugal and several cruel bits of bad luck at Imola rubber stamped it.

It’s easy to downplay Hamilton when you say he’s mainly got to just beat Bottas. But you can’t fault the greatness. The British driver is now a 7-time world champion, securing it in a genuinely thrilling display to the slippery-slidey Turkish race when Mercedes did not look comfortable at all. Having spent the year championing race and social policy causes off the track, he still has the look on it as a man very capable of winning races and titles. 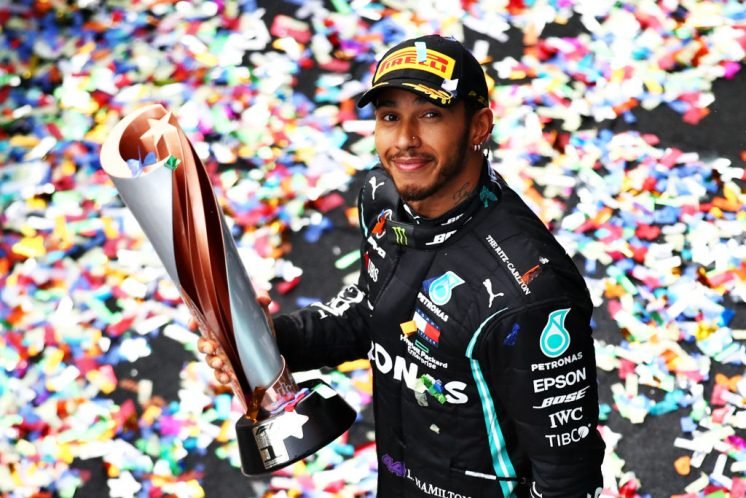 He should still be around for 2021 – he’s yet to sign a contract but is expected to do so – and will again be the force everyone else has to overcome. A tantalising vision of the post-Hamilton days was shown in Bahrain, however, as when he had to miss a race due to covid, Merc junior Russell was bumped up from Williams and but for operational errors and a puncture, could’ve taken a shock victory on his first try in a Mercedes.

It will take a lot to stop Mercedes in 2021. At the front of the queue to try are Red Bull, but the 2010-13 champions are still yet to put consistent form together. Max Verstappen was a routine thorn in Mercedes’ side but 5 DNFs and a generally slower Honda engine meant he couldn’t put in more than that, although Alex Albon’s inability to get close to Verstappen also didn’t help. Red Bull have an awkward future to consider, with their young driver programme in an difficult spot and Honda walking away for 2022.

An entertaining midfield, meanwhile, eventually saw McLaren squeeze into 3rd place ahead of Racing Point. The latter was perhaps the sport’s most interesting team, with allegations over its copycat “Pink Mercedes” culminating in sanctions, both drivers testing positive for coronavirus, a first win since the Strolls brought it and the previous decision to bin that race-winner Perez.

But they were squeezed to the big spot by McLaren, in a twilight gift of the bromance between Carlos Sainz and Lando Norris. In their last year with Renault before switching to Mercedes power for 2021, they again beat their engine supplier – having also pinched their star driver Daniel Ricciardo – but despite never really matching the promise of exceptional running at the 2 Austrian rounds, they were consistently able to get 2 cars in the top end of the points, or at least do so more often their rivals.

This three-way battle between McLaren, Racing Point and Renault saw all 3 grab multiple podiums on their way to finishing ahead of Ferrari, with Alpha Tauri limited due to an inability to get both cars in the points in the same race – even despite the heroics of Gasly holding off the faster Sainz to win at Monza and prove his Red Bull doubters wrong. 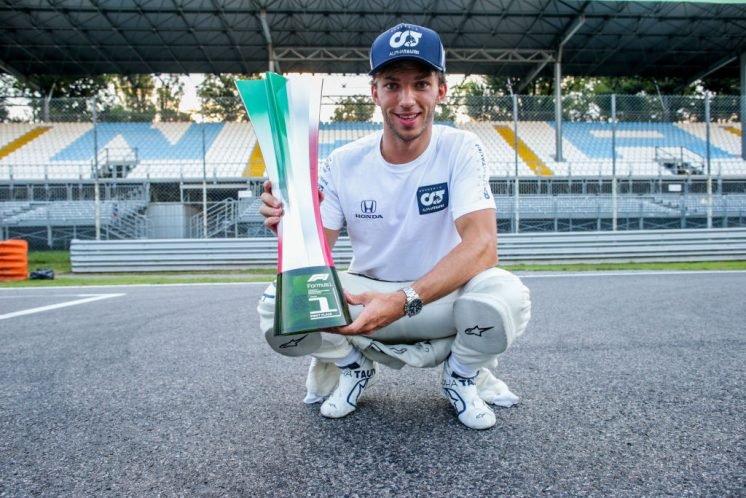 It was a year for podium variety. 13 drivers took podium spots – the highest in an F1 season since the well-loved 2012 campaign, with both permanent drivers at the top 6 finishing teams getting one and at least 2 other drivers coming close to landing those rostrum slots.

The year was also a weird one for safety. For a lot of 2020, there were some strange moments on safety, such as a big crash at Mugello caused in part by safety car mismanagement, drivers nearly running over stewards at Imola and bad organisation at Istanbul with a recovery truck.

But the fact Romain Grosjean is still with us shows F1 safety protocol works when faced with the worst case scenario. The French-Swiss driver suffered a huge fireball crash in Bahrain that felt straight out of the more loosely regulated 1950s/60s, but he was able to leave what turned out to be his last F1 race with just hand burns courtesy of great safety innovations rather than suffering a more serious injury or worse. 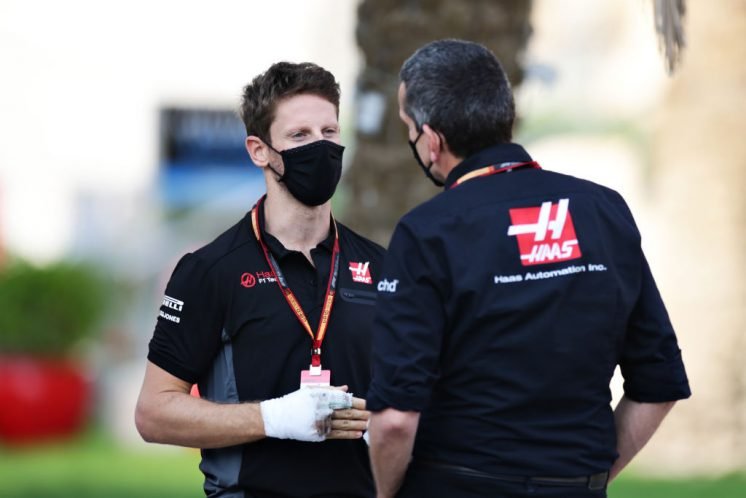 Grosjean and team-mate/Drive to Survive co-star Kevin Magnussen make their exits from F1, with Haas moving on in 2021 to promote an all-rookie line-up containing the eagerly anticipated new arrival of F2 champion Mick Schumacher and a very much not eagerly anticipated arrival of rouble-rich social media disaster Nikita Mazepin.

They’re not the only new arrivals, with Fernando Alonso returning after 2 years to lead Renault’s rebranded Alpine team in 2021, while a mixed up season sees Sainz, Ricciardo, Perez and Vettel changing teams.

F1 is currently optimistically hoping to host a full 23 race season, including the return of all the old circuits, a debut race in Saudi Arabia and a mystery circuit for a late April spot vacated by issues with the planned Vietnam race.

But regardless of whether or not they can actually pull it off, the memory of F1 in 2020 is a unique experience that provided plenty of entertaining races in a miserable year and despite said miserable year. Had Mercedes been just slightly slower, it could’ve been an all time classic, but it’ll merely settle for very good.

With 2021 serving as an unexpected encore for this generation of F1 car after the planned rule changes were pushed back due to covid, it’ll be fascinating to see what the new campaign will provide. If its as exciting as this year’s better races, it should make for good watching.