Talk of a European Super League has not exactly been a new thing.

In 1968, football writer Arthur Hopcraft suggested a faint surprise a rumoured European Super League had not appeared. A few decades later, several newspapers ran speculative stories in 1998 after talk briefly emerged an associate of then AC Milan owner Silvio Berlusconi was putting one together.

Thee idea has also had routine connections with Real Madrid. Club legend Santiago Bernabeu told interviewers in 1961 he saw it as a fantasy project to aim for, as did current President Florentino Perez when he returned in 2009.

For many years, the concept has been seen as sufficiently real enough to be a threat to UEFA. They and the big clubs, usually powered by the European Club Association (ECA), have been at loggerheads a lot in recent years, with a Super League concept sufficient to scare UEFA into concessions. This has been seen with the dubious call to revamp the Champions League into an incomprehensible “Swiss System” format from 2024, seemingly largely at the behest of Juventus chairman Andrea Agnelli.

Initial reports surfaced on Sunday (17/04) by the Times, in conjunction with the New York Times, broke that 12 big clubs, including English football’s “Big Six”, were backing European Super League proposals with billions in backing from US bank JP Morgan. But with a history of a sabre rattling, some felt like they could dismiss it as another rumour.

But instead this set in motion one of modern football’s craziest weeks. An official press release signed by the self-styled founders broke cover late on Sunday night, a website with mission statement was launched, the clubs quit the ECA, UEFA went on the warpath, several executives at big clubs were personally criticised and a real sense a game of high-stakes brinksmanship had begun.

Yet almost as quickly as it launched, it just seemed to collapse. In the midst of a near unrelenting backlash from the club’s own players and fans, historical figures, broadcasters, leagues, associations and governments, 9 of the 12 clubs decided to back out. Chelsea and Manchester City were the first to do so on Tuesday night, with images of mass protest outside Stamford Bridge seen around the world. The rest of the English clubs signed up would also backed out on Tuesday, with Atletico Madrid and the Milan duo bailing on Wednesday, while Juventus think the concept is done..

This leaves the El Clasico duo of Barcelona and Real Madrid as the last two standing. This is almost as hollow a Super League as the original proposal, which was missing the big clubs of Germany, France, Portugal, the Netherlands, and who knows who else. With the clubs leaving the ECA, it also leaves them as outsiders in the European club game going forward.

Real Madrid’s Perez was the only person willing to public take the flak, making two appearances in Spanish media to defend his ideas. This wasn’t exactly successful, not least suggesting he should be allowed to change football to chase hypothetical fans of the future or the young.. 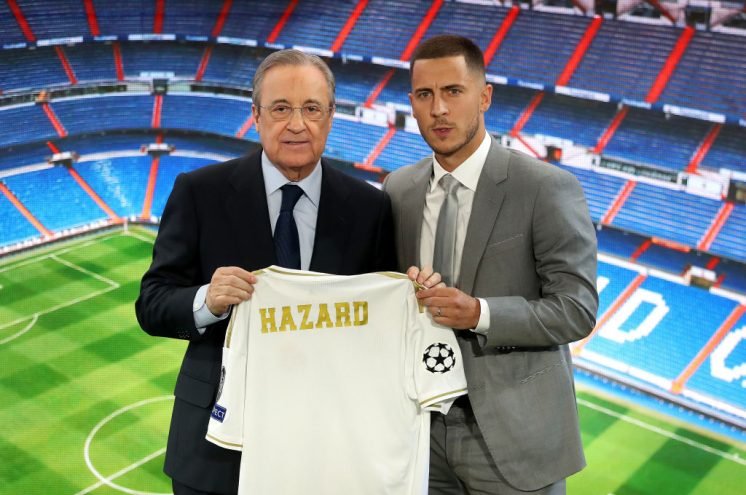 Such a disastrous PR launch means the big clubs needed a lot of work to persuade people to come on board, or at least more money to try and persuade others. But they didn’t even do that. It is possible that the pressure ultimately told, but it felt like that the concept went from looking nailed on to falling apart quicker than anyone expected.

In the ashes of all of this, could proponents of a European Super League have managed any other outcome?

There will be some who argue – rightly – that the ultimate way to avoid this humiliation was to not bother. The quantity of opposition was always likely, if perhaps not the omnipresence of it, while the fact that so many clubs said before this that they weren’t interested and some of the others weren’t really that committed should’ve been a red flag.

It is odd that for all negotiations have been going on for years, the idea was unfinished. So many things felt like they were missing, with the idea also reliant on clubs whose support wasn’t as rock solid as others. Real pressure could’ve been applied by the breakaway clubs had the European Super League project rocked up with something potentially more tangible than arrogance and an expectation everyone should just hop on board.

A vacuum quickly formed as nobody was that willing to put their hand up and defend it, leading it to get hammered from all angles, and with the own club’s fans, managers and players joining in the criticism, the owners simply wilted. The owners who proposed it were content to fade into the background and let the idea speak for itself, almost with an arrogance everyone would follow them wherever they wanted to go.

The clubs did have other points they wanted to raise beyond this being an easy cash grab to make up for the covid-enforced collapse in gate revenue. But again, they were just poor at making the point and just left people feeling it was a chance to grab easy cash, which enhanced the dissatisfaction. 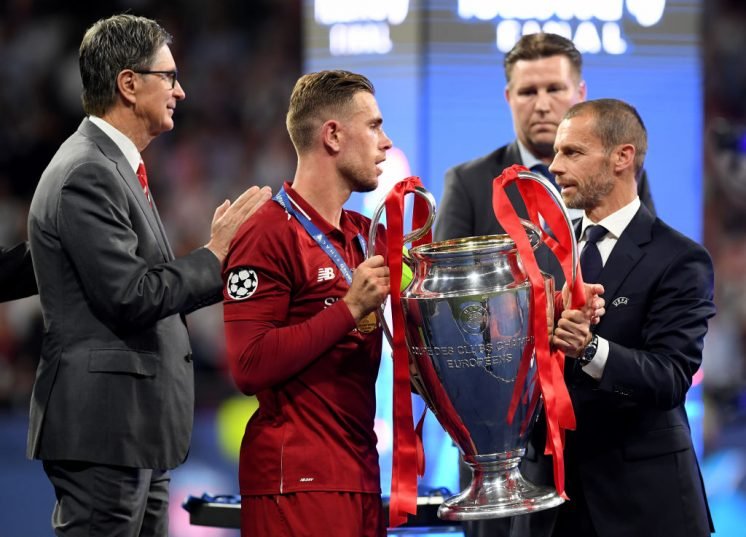 Chances are that perhaps the only way a Super League could’ve been done was really with UEFA endorsement, similar to how the top English clubs convinced the FA breaking away from the Football League in the early 90’s was the right thing to do. But in this case, a European Super League with UEFA consent would’ve defeated the idea of these clubs as system-breakers, given the entire point of this exercise was dissatisfaction with how UEFA are doing things – something the clubs involved were weirdly not willing to shout from the rooftops.

The ultimate situation we’ve seen play out is that clubs that felt they came to conquer with the European Super League concept but have only reduced their power. Juventus’ Agnelli is endemic of this. He has gone from being a real kingmaker in the club game to voluntarily leaving his roles in UEFA and the ECA, and his week also saw him being repeatedly heckled on Serie A owner Zoom calls with cries of “Traitor!” by other clubs’ bigwigs.

Meanwhile, the owners of several of the English clubs involved are facing calls to sell up and are being forced to apologise to their fanbases. Protests have already been seen outside the Emirates, where Arsenal fans see this as one step too far by already unpopular owner Stan Kroenke, and at the Tottenham Stadium, where Spurs fans see this move as something that’s crystallised dissatisfaction with owners ENIC – something sacking Jose Mourinho clearly didn’t resolve. There are also Man Utd fans again looking hopeful they can shift the Glazers, to the point where some invaded their training ground, even if they likely won’t sell on the cheap. 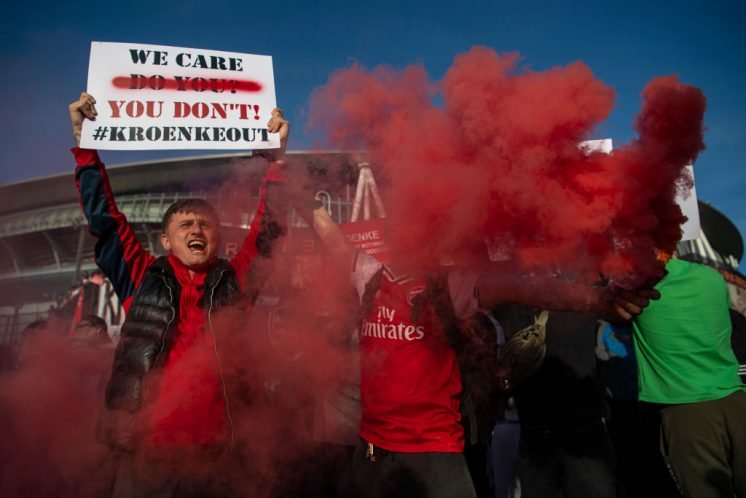 It’s not as if football has its problems without this week’s cycle of crazy fast events. UEFA’s new-look Champions League relatively snuck under the radar, is not looking like an improvement. Meanwhile, FIFA wants in with its own expanded Club World Cup – although talk of this has been quiet of late – and many of the systemic issues within the existing structures are still in need of a resolution. This is particularly seen in domestic football, given talk of a broken system has predated this mess, the covid pandemic decimating revenue or even the collapse of Bury in September 2019.

It is unlikely we’ll see a European Super League proposal resurface for a while, or at least with the current faces promoting it. Equally, the threat is that it even if safeguards are installed to prevent a reprise, the idea may well still resurface in some form or another unless some kind of changes to the football ecosystem are made.

It is still too early to speculate what, if any, penalties will be enforced on the wannabee breakers. It’s also too early to know where proponents who still believe in this idea go, or if we see a continuation of football’s civil war.

What we do know is that this week’s events have presented top level football with a crossroads. It can either continue down a hyper-capitalist path that has lead us to the rich using the pandemic to try and make themselves richer, based on an arrogant notion their concerns are bigger than everyone else in football. Or it can make an effort to try and recalibrate, and rediscover what people want from football, maybe even creating a more equitable and sustainable sport.

Chances are, ultimately, when some kind of conclusion is reached, somebody is going to be hurt.