MK Dons’ early years would see the team create some unwelcome memories of the play-offs.

There was defeat by Shrewsbury in the last game at the National Hockey Stadium in 2007, an agonising penalty shoot out loss to Scunthorpe two years later, the still-controversial clashes with Peterborough two years after that and 2012’s defeat to Huddersfield Town.

Today is 9 years since the second leg of the Huddersfield contest, which saw MK Dons take a 2-1 win in Yorkshire but lose the two legged contest after a 2-0 first leg defeat at stadium mk.

MK’s promotions in 2015 and 2019 were achieved by automatic promotion through wins on the last day, and in both of them, one of the many palpable emotions was relief the play-offs were avoided.

9 years on from that last stand against a team that would beat Sheffield United in that year’s League One play-off final, where are the Dons team from that day now?

The 2011/12 season came shortly into Martin’s second spell at the club. Having left MK Dons in 2006, he returned in 2010, with the 2011/12 campaign seeing Martin hold ever present status. He would stay as a regular before exiting in 2017. Martin is now on the books at Premier League side West Ham United, where his dad is a club legend, though all of his appearances came last season.

This was something of a breakthrough campaign for Chicksen, who largely played at right-back rather than his preferred left. He would make 30 appearances in the season, even accounting for a brief loan at Leyton Orient. He would leave in 2013 for Brighton, though his most prolific spell in a first team squad since was in two years at Bradford City. Chicksen is now on the books of National League side Notts County.

The Scottish centre-back would be a regular pick for Robinson when available, though this availability would be hurt by injury and suspensions. He would make his last appearance in 2013 before joining then-Championship side Blackpool, first on loan then permanent. The Scot would dart around the EFL before returning to Scotland in 2016 with a move to St Mirren. He is now on the books of Scottish third tier outfit Peterhead.

Williams’ first season in England after joining MK Dons from Irish side Sporting Fingal would see a player who started further up the pitch regularly turn out in defence. He would make nearly 50 appearances in all competitions in his debut campaign, and would improve the following year when he lifted the Player of the Year gong. He would move to Millwall in 2014, and now age 34, is still in the first team picture with the Championship club. 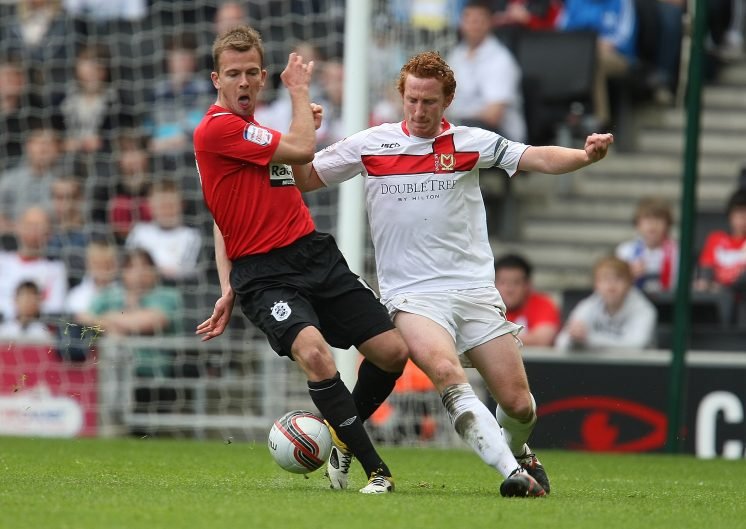 Even in 2012, Dean Lewington was something of an MK Dons stalwart. Nearly a decade on from that, his status as playing in 100% of MK Dons’ seasons since their 2004 foundation remains intact. The now-36 year old is still club captain, continues to be one of the first names on the teamsheet, has now hit 800 competitive club appearances for MK Dons and has already agreed to another year.

Gleeson was in his breakout spell at the Dons at the time, featuring for MK in a five year spell before later joining Birmingham City. The midfielder would even score for the Blues at stadium mk on his first visit back in 2015 a few games into the Dons’ Championship season. After spells at Ipswich Town and Aberdeen, he’s now at National League outfit Solihull Moors.

One of the regulars in the Robinson era, Potter had already established as a regular at the end of his first year since joining the club from Sheffield Wednesday. The Liverpool academy graduate would leave his mark on the squad in 2011-12, winning that season’s Player of the Year prize. He would continue to be a regular until Robinson’s departure, before leaving in 2017. He has now retired after a brief spell with National League side Altrincham in 2020.

Powell would score the first of the Dons’ goals in their 2-1 win in Huddersfield. It would be his 11th goal of the campaign – the highest scoring season of Powell’s time in the MK Dons first team picture. Like a number of other key players in the squad that reached and then competed in the Championship, Powell would leave in 2017. After time at Northampton, he spent 2020-21 at Crewe, though the Dons’ fellow League One side recently confirmed his release.

Dublin-born O’Shea arrived in Milton Keynes on a trial basis at the start of the year upon expiry of his Birmingham City contract before becoming a permanent arrival. He would stick around for just over a year as a semi-regular, before joining Chesterfield on loan and then a permanent basis. O’Shea then later impressed at Bury but was forced out upon the club’s collapse, and he now turns out for Brisbane Roar in Australia. 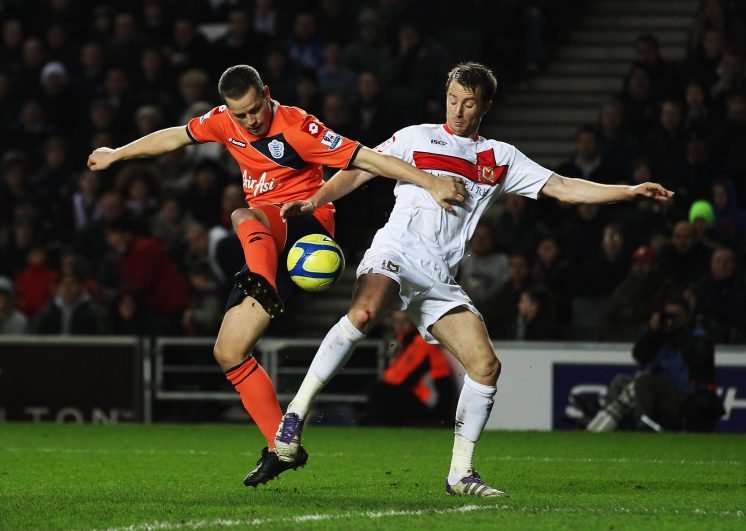 Bowditch would end his first season in Milton Keynes as top scorer after joining from Yeovil Town, despite largely playing in a wide role. He would be a regular for the Dons through to his exit in 2017, including during their promotion winning season and Championship campaign. He now has a Community Ambassador & Fundraiser role for the MK Dons’ SET, while he also co-hosts a podcast and recently hosted the Dons’ end of season awards do.

Striker MacDonald was something of a late arrival, joining from Brentford to take the role as main striker after Sam Baldock left to join West Ham early on in the year. After a bright opening campaign, he struggled to match it the following season and left in January 2013 for Leyton Orient. Now age 40, McDonald is still playing, turning out for Chislehurst based non-league team Glebe after bouncing around various non-league outfits in South East London, while he also has landed punditry and coaching gigs.

Robinson remains MK Dons’ longest serving boss, with this coming towards the start of his 2010-16 reign as manager. He would eventually take the club into the second tier in 2015, only for the team to go down after one season and the boss to leave in October 2016. He had a brief spell at Charlton and now leads Oxford, where he lost in last season’s play-offs and is looking to amend that after sneaking Oxford into this season’s play-offs. 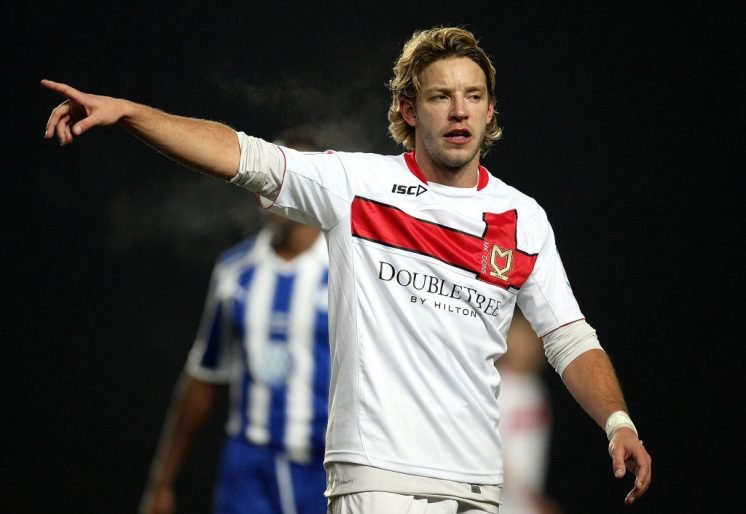 Smith would score a late game winning goal after coming off the bench. The former Leeds and Manchester United player was on loan from Newcastle at the time, before returning to Milton Keynes for an extra two campaigns. After retiring in 2018 following time at Notts County, he now works at a football academy in Florida.

Luke Chadwick was a regular after arriving from Norwich in 2018, winning back-to-back Player of the Year gongs in the campaign for this one. He made 50 appearances in 2011-12, though this one came as a sub. He retired in 2015, and recently opened a football training centre in Milton Keynes alongside fellow ex-Don Izale McLeod.

Jabo Ibehre would be part of a double sub alongside Chadwick. This was in keeping with a regular role for Ibehre, who was mainly used as a substitute in his fan favourite role with the club after joining in 2009. He would leave for Colchester in 2013, and would be a regular for sides in League 1 and 2 before retiring in 2020 after a severe leg injury in a training game while at Cambridge a year earlier.

Remaining on the bench were reserve keeper Iain McLoughlin and defender Mathias Kouo-Doumbe, who have both now retired from professional football. Kouo-Doumbe left MK Dons in 2013 and would exit the game after leaving Northampton in 2014. As of 2020, he was working in sports development in France. Meanwhile, McLoughlin now works as a personal trainer in Bedfordshire after hanging up his gloves.