MK Dons have confirmed the loan signing of Spurs striker Troy Parrott and the re-signing of midfielder Josh McEachran.

Parrott is the 9th new arrival at MK Dons ahead of the 2021/22 season, with the 19-year-old Irish international arriving on a season long loan from Spurs. The striker did feature for Spurs as a substitute at MK Dons in a pre-season friendly last night.

The Dublin-born striker has made 4 appearances for the Spurs first team, while last season he enjoyed loan spells with Millwall and then Ipswich Town. He has also been capped six times by the Irish national squad, scoring twice in a 4-1 win over Andorra earlier this year.

Parrott told iFollow MK Dons of his delight to move to the club. He said, “I’m really happy to be here. The way that the team plays suits me and the way that I want to play – I’m looking forward to being a part of it.

“Russ has wanted me to come here previously but for one reason or another it hasn’t happened. He’s made it known that he wants me, which is a good feeling to have. I’m just happy to be here now and I can’t wait to get going.

“I hope to bring goals to the team, of course, but I also want to contribute by linking play and getting on the ball as much as possible. I saw last night how good the team is at creating chances and, as a striker, I can’t wait!”

Meanwhile, MK Dons have also confirmed that midfielder McEachran will stay at the club after signing a new contract.

The 28-year-old midfielder made 14 appearances last season after joining on a short-term contract towards the end of the campaign. His original deal expired at the end of the 2020/21 season, with the Oxford-born midfielder’s availability also hindered after he caught covid.

The former Chelsea, Brentford and Birmingham midfielder has signed a deal of undisclosed length to remain with the Dons. 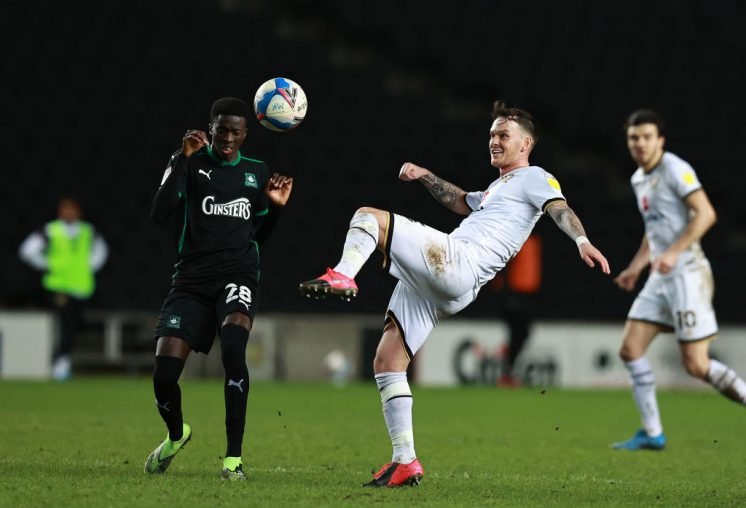 McEachran said, “I’m really excited to be back. It’s been a long few weeks, getting things sorted, but I’m delighted to be here again and I’m excited for season ahead.

“This was a perfect fit for me last season and I was able to come in, get 14 games under my belt and help the team finish the season strong. I absolutely loved my time here so it was a no brainer to come back here.”